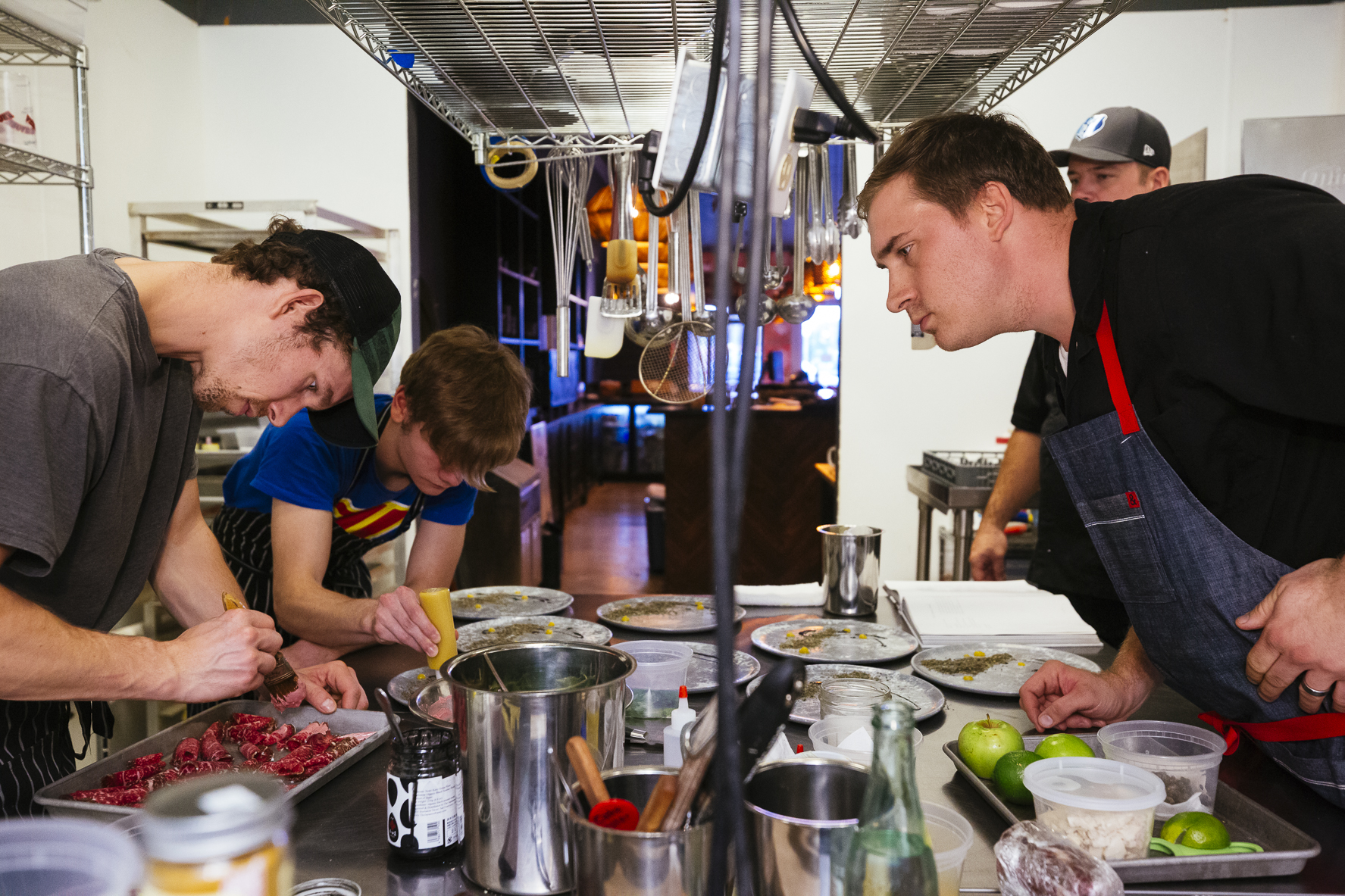 Spend more than a few minutes with Zach Nicholson, and it becomes clear that the 33-year-old is determined to be great—and that he’s absolutely prepared to do the hard work to get there.

Fancy French cooking techniques, obscure Japanese ingredients and world-renowned chef and restaurant names roll off of his tongue faster than I can process them, much less write them down.

After working for several top chefs in Memphis, he set out on his own about three years ago with Lucky Cat Ramen pop-ups at The Cove and various local breweries. He’s been serving from a temporary restaurant space in Cooper-Young for the past couple of years.

A permanent spot in the Broad Avenue Arts District is in the works, and will hopefully open before the end of the year.

While waiting for final code inspections on Lucky Cat’s outdoor deck, Zach is utilizing the new kitchen space to up the city’s restaurant game. He recently launched a weekly culinary workshop on Mondays for local chefs interested in tinkering with recipes from Michelin-starred restaurants. 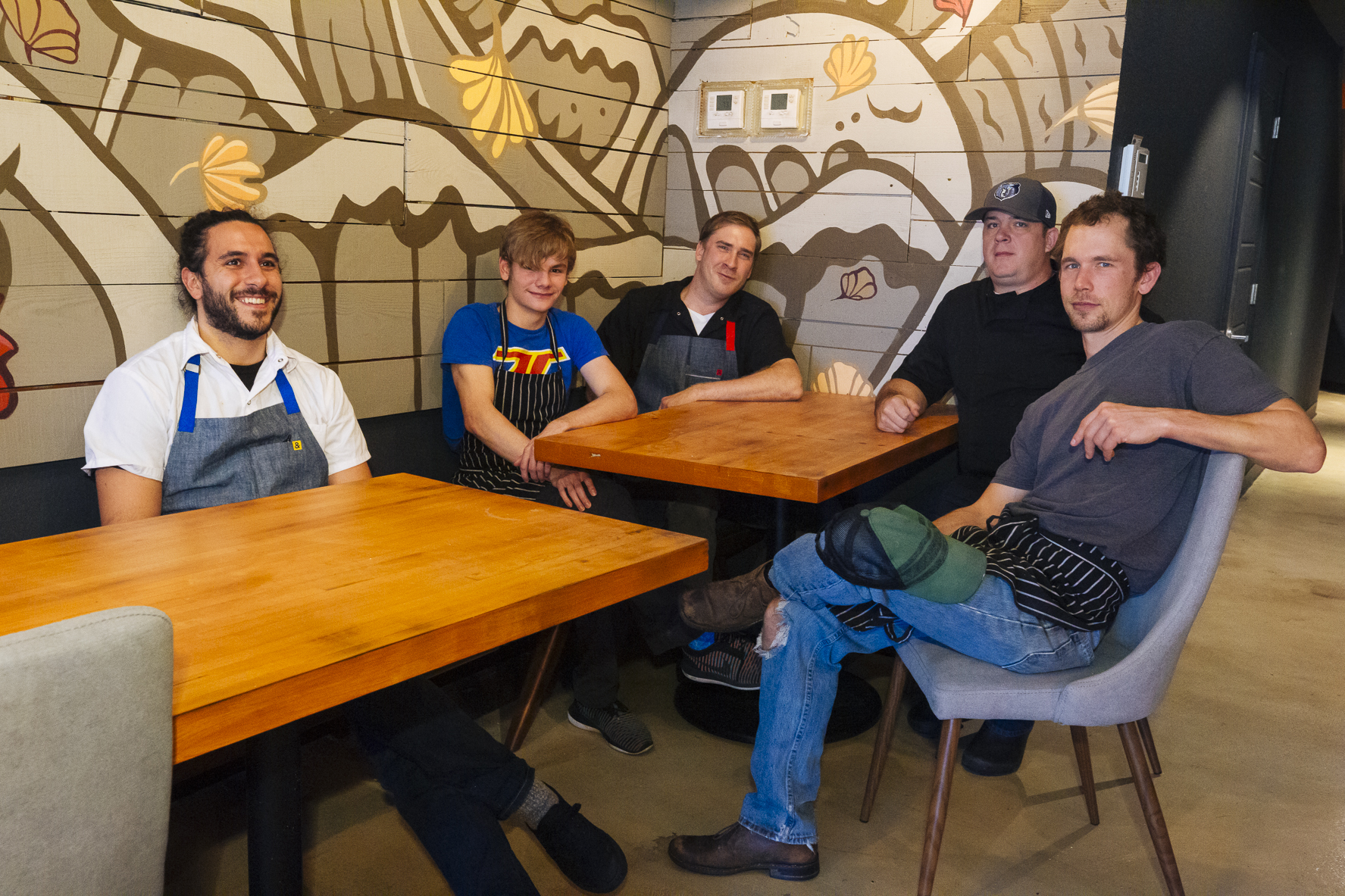 “It’s a great way for us to challenge ourselves and celebrate our craft without the pressure of a ticket printer.”

It’s also been a great way for Zach to find techniques and flavor combinations to use on his new menu, which will feature upscale fare in addition to the exquisite ramen that is Lucky Cat’s specialty. For example, at the very first workshop, the chefs prepared a black tea dashi jelly that later inspired a pork belly and mustard green dumpling with black tea-infused kelp stock for the new menu.

Michael Qandah and Patrick Hanthorn, workshop regulars, are on Zach’s staff. The three of them have a familiarity that keeps the workshops flowing, and it’s fun to listen and watch as they riff off of each other. 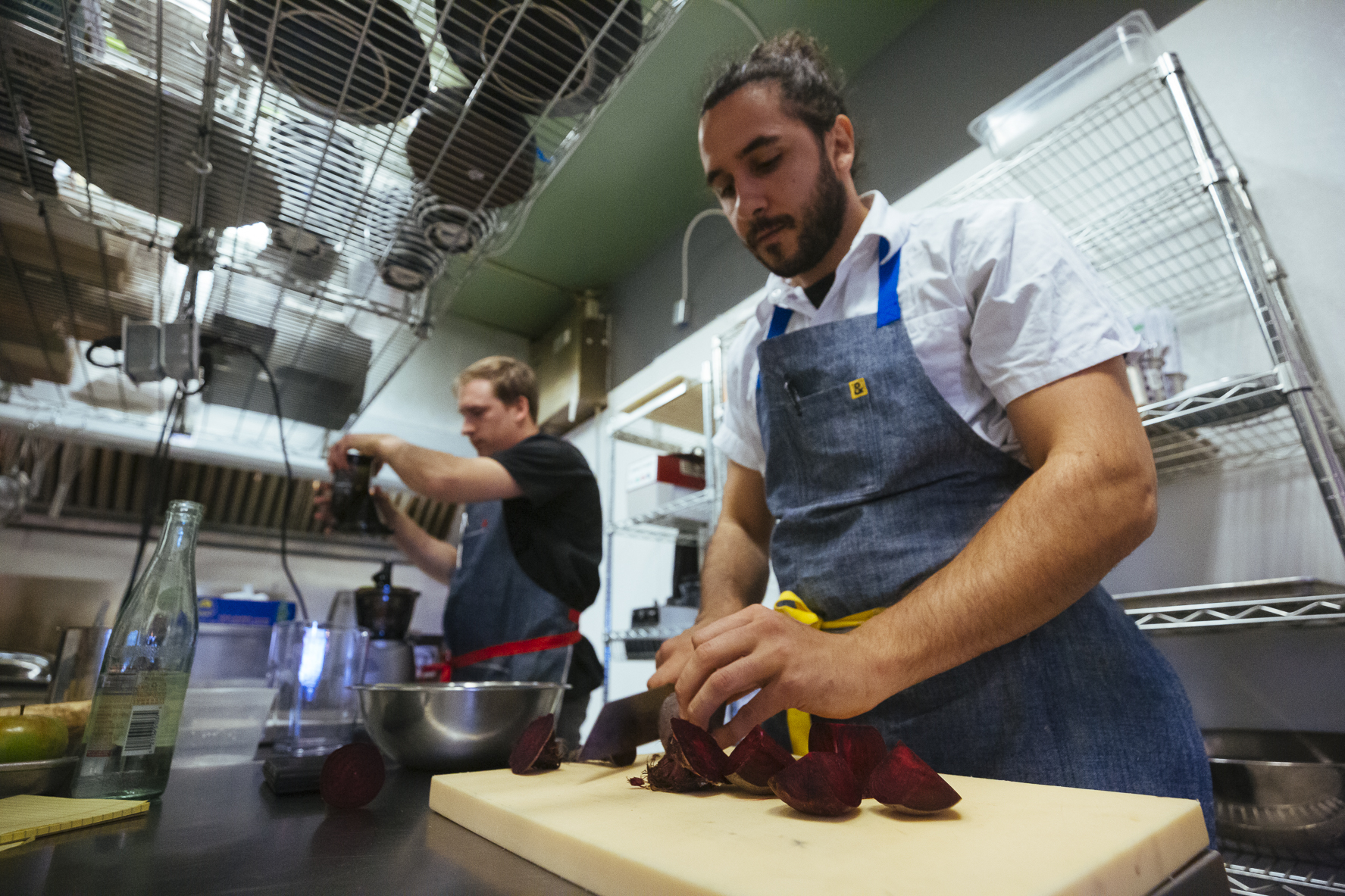 Zach describes Michael as his “right-hand man” and I note that they look like teammates in their nearly identical dark-washed denim aprons. Michael sports a man bun, in a good way, and is the most animated of the chefs in attendance. He and Zach met while working for Andrew Michael Italian Kitchen, where Michael was the lead butcher for a year. They have continued to work together at Lucky Cat, even though Michael has a side business, Happy Bear, in Little Rock where he is from. “It’s a vegan thing,” he says. “We do cakes, pop-ups and recipes on Instagram.”

Zach interjects to make light of their animal-inspired names, “Lucky Cat and Happy Bear and Birdcap [the artist] living upstairs!” (Birdcap is doing a six-month artist exchange with Zach. He’s decorating the interior and redoing their logo.) 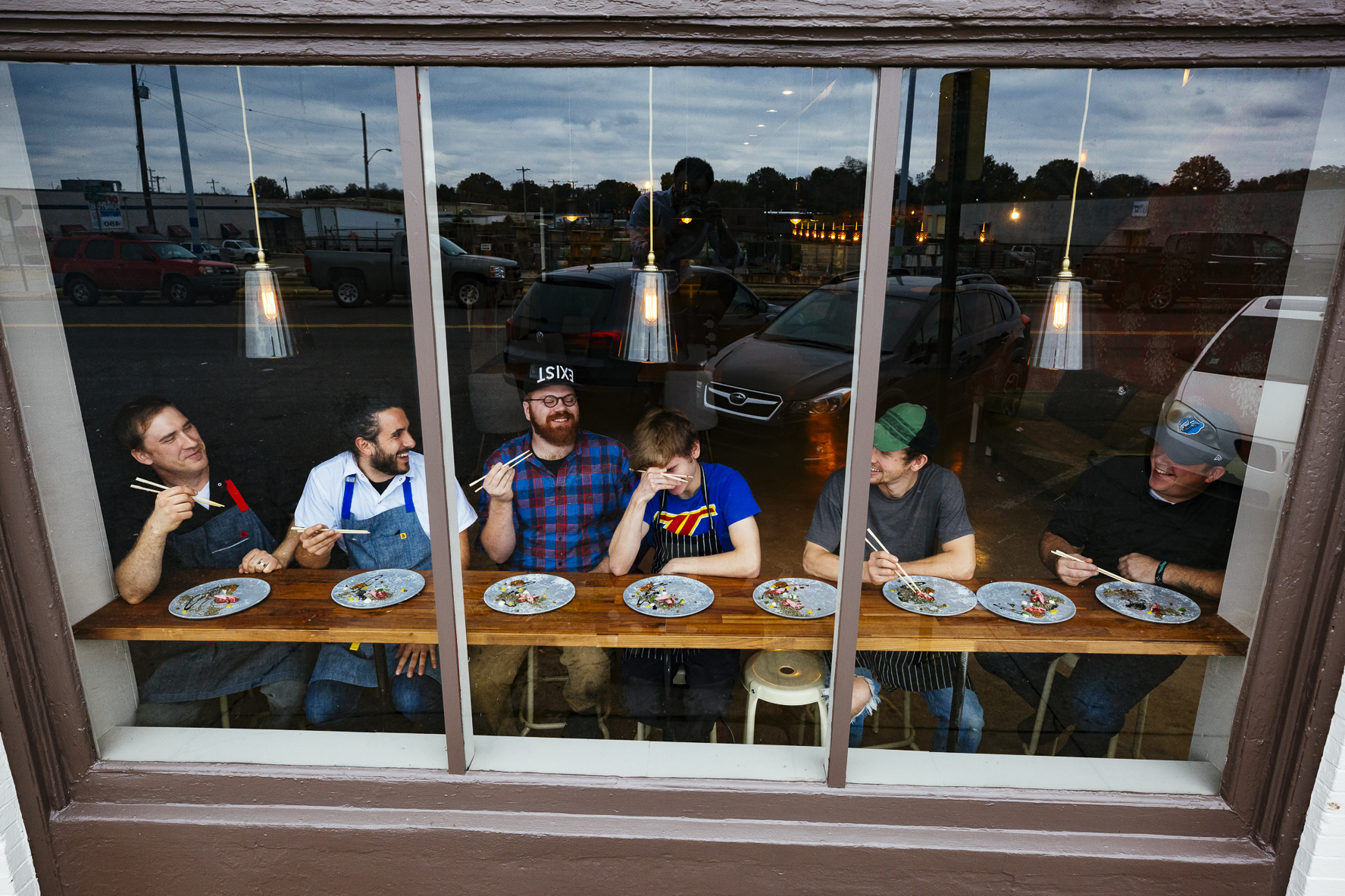 Michael continues, “Since we don’t have too many Michelin star restaurants that are accessible, it’s nice to get insight and get inspired by their recipes.”

He takes a sip from a bottle of sparkling water and then looks sheepish. There’s some confusion as to which Topo Chico is whose, so Michael simply collects the three bottles on the table and chugs them all to put an end to the dispute. 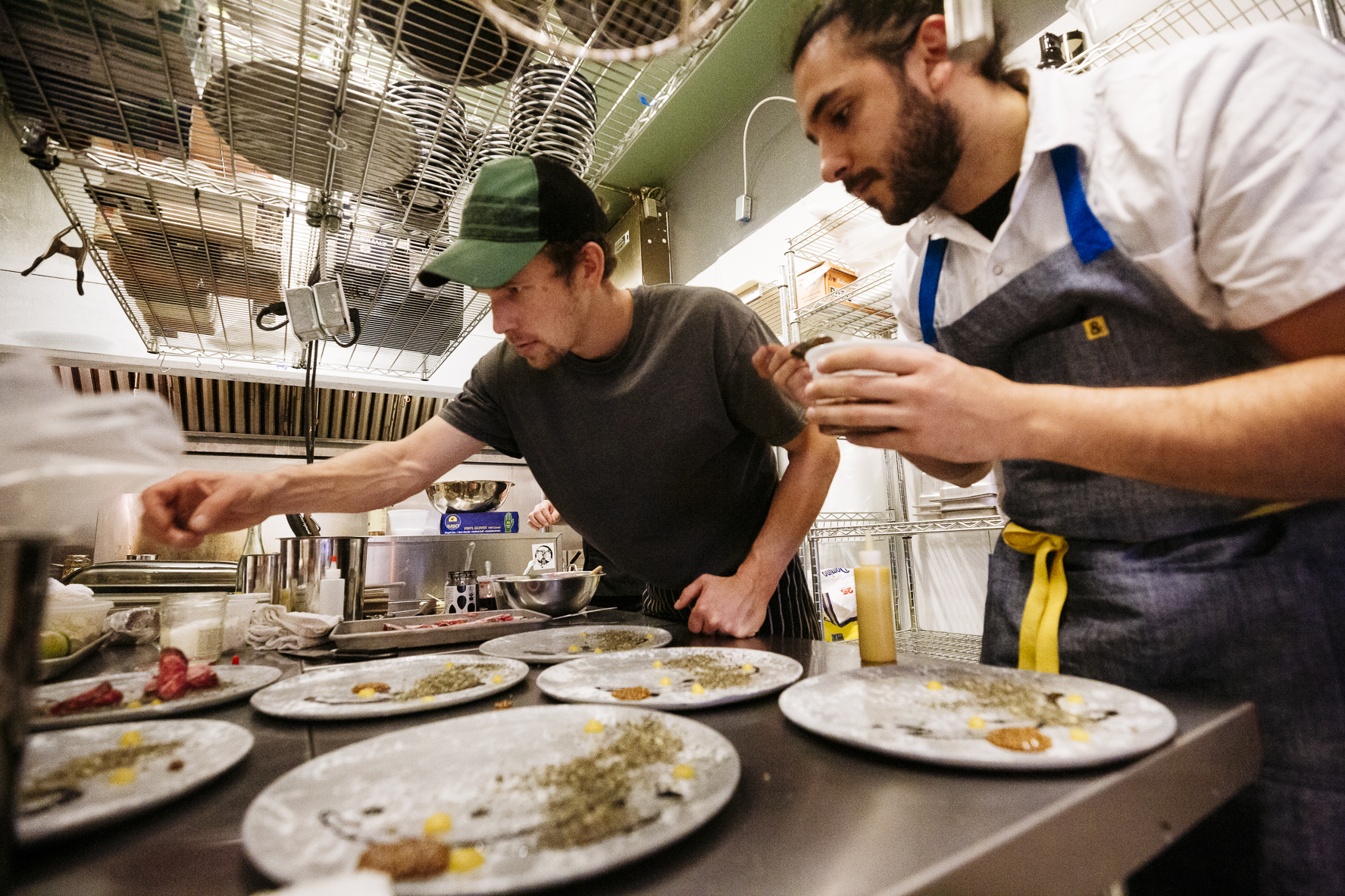 Patrick, a quiet, serious type, who’s working in jeans, t-shirt and a ball cap, says he’s enjoyed trying out the different techniques that he wouldn’t normally do on his own. “In the workshops, it’s five or six guys working for a couple of hours on one dish. There are a lot of elements working together. It’s broadened how I think about higher end food,” he says.

Clearly these are not the types of dishes typically found on menus in Memphis. 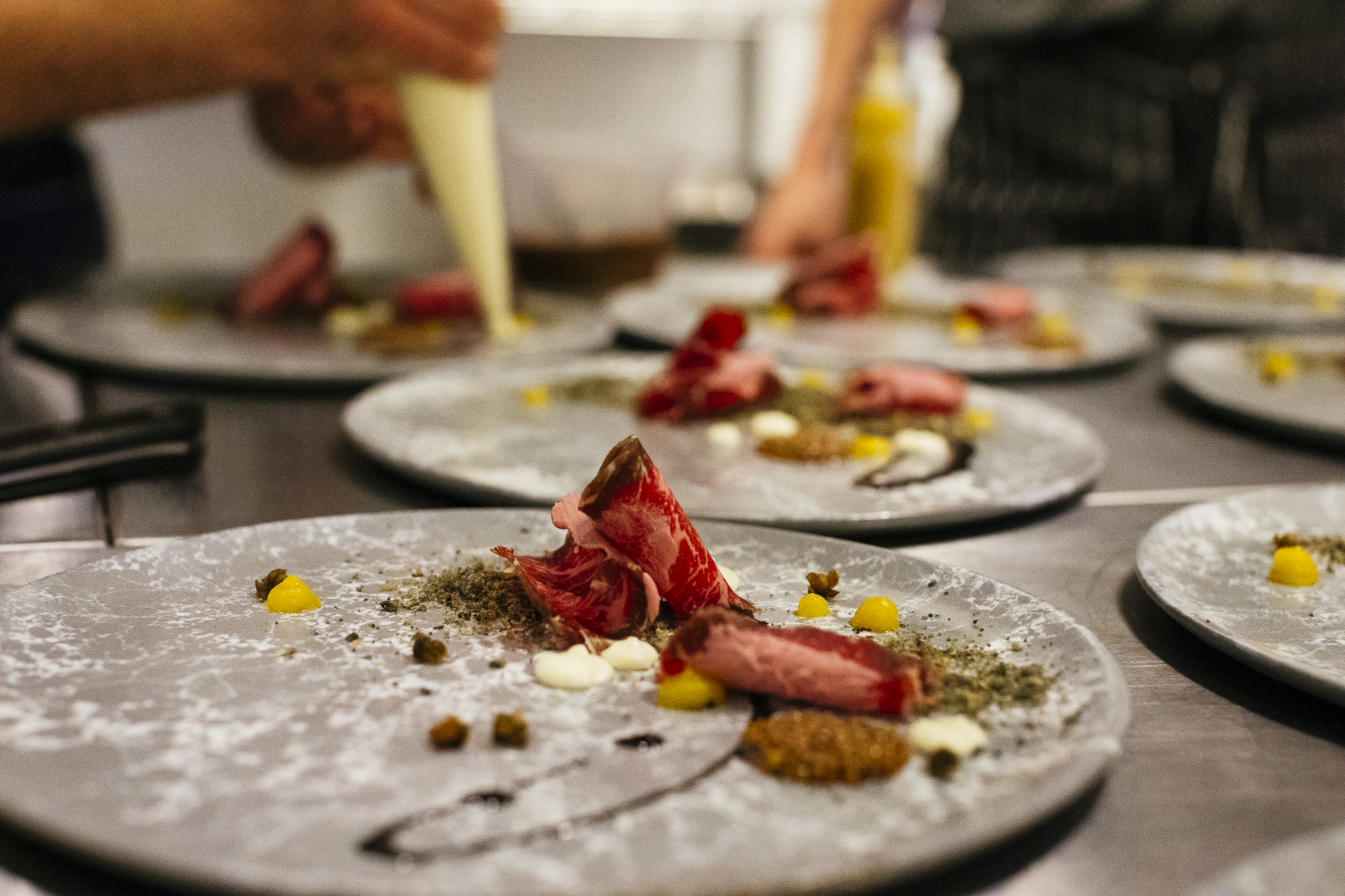 Dimitry Rabkin, who I could tell was on his very best behavior with a guest writer in attendance, is the lead cook at the newly opened P.O. Press Public House & Provisions in Collierville’s town square. He met Zach through Jimmy Gentry, chef and co-owner of P.O. Press. (Before moving to the space on Peabody, Zach used Jimmy’s Paradox Catering space to prep for his pop-ups.) Dimitry sips a tall boy and says he enjoys using his day off to cook without the added stress of preparing for service.

“It’s been a huge learning experience. I feel like I’m really honing my craft.” 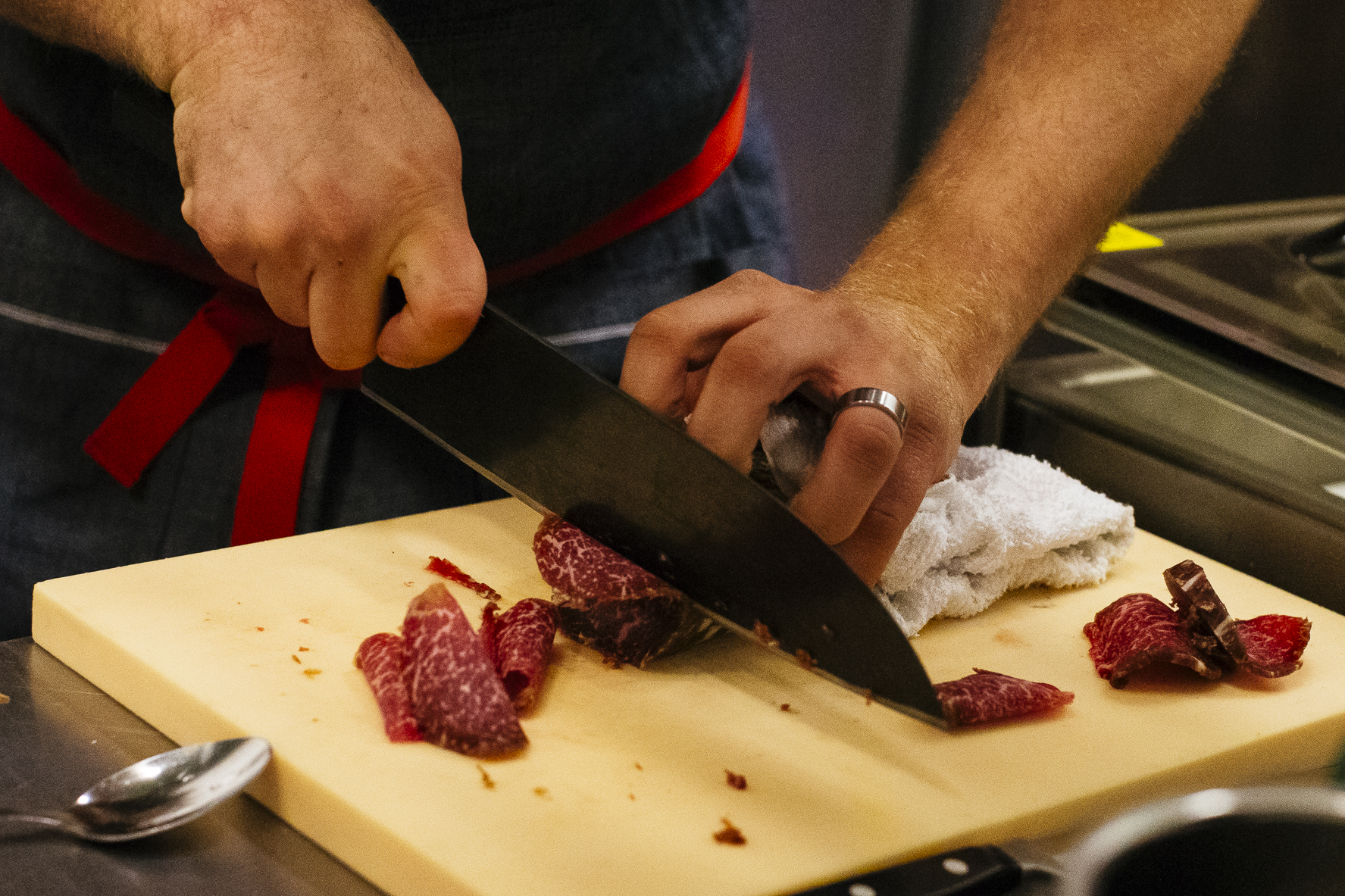 In attendance for the first time is Dru Kratzke, resident chef at Sur La Table—a chain retailer for a variety of upscale cooking and dining supplies that also does cooking classes and private events in The Shops of Saddle Creek in Germantown. He has a quiet confidence and has been working with Zach since “day one” and says Monday is usually an office day for him, but he’s glad to be in Zach’s kitchen helping out.

As Michael reads from the recipe, Patrick checks the duck, Zach prepares the fennel and potato puree, and Dru maneuvers pans and keeps the workspace clear. (Dimitry slipped out for a few minutes.) 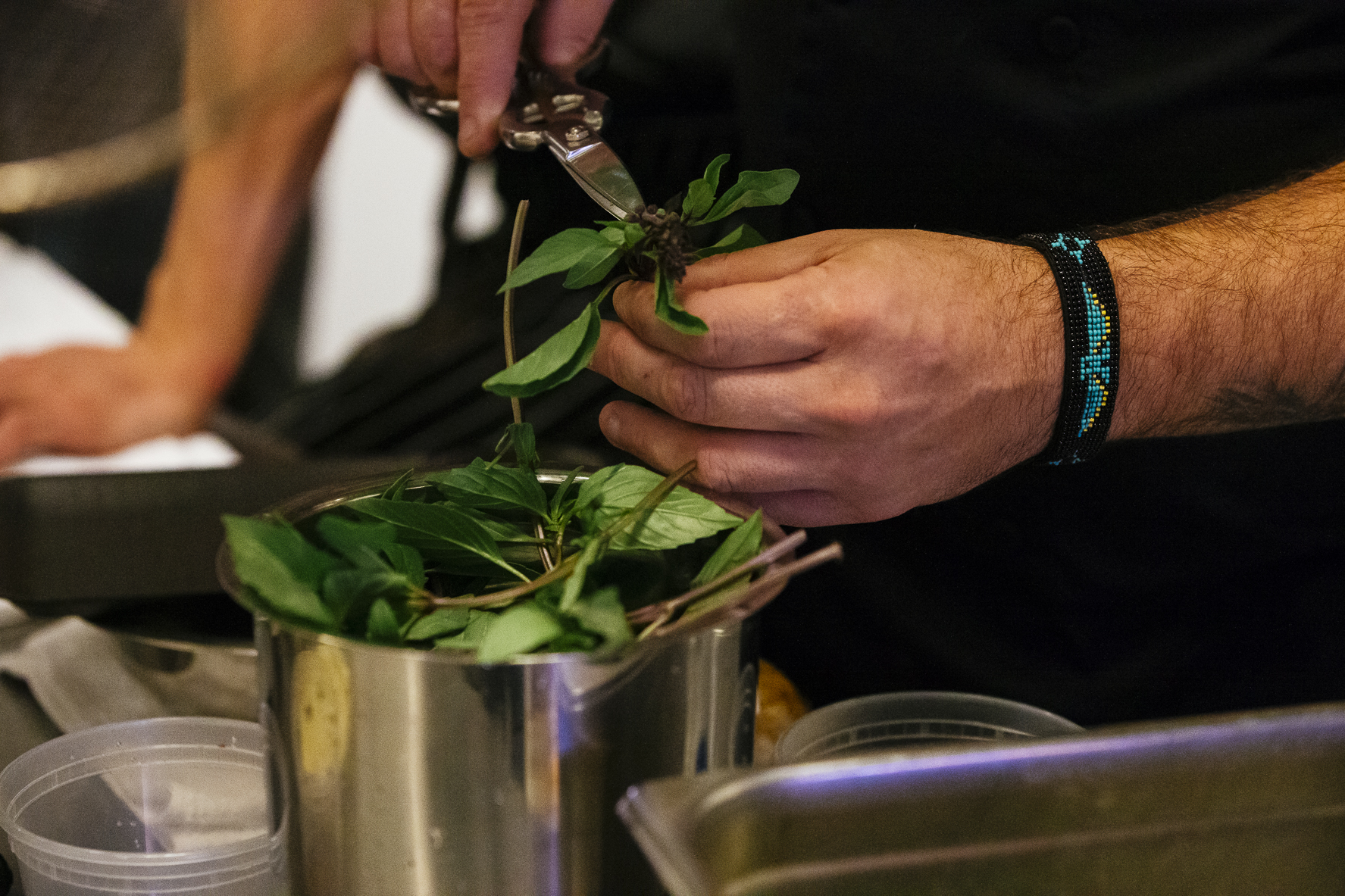 It’s obvious that these guys share an ethos and have enough combined experience to jump in and really make the recipes their own. 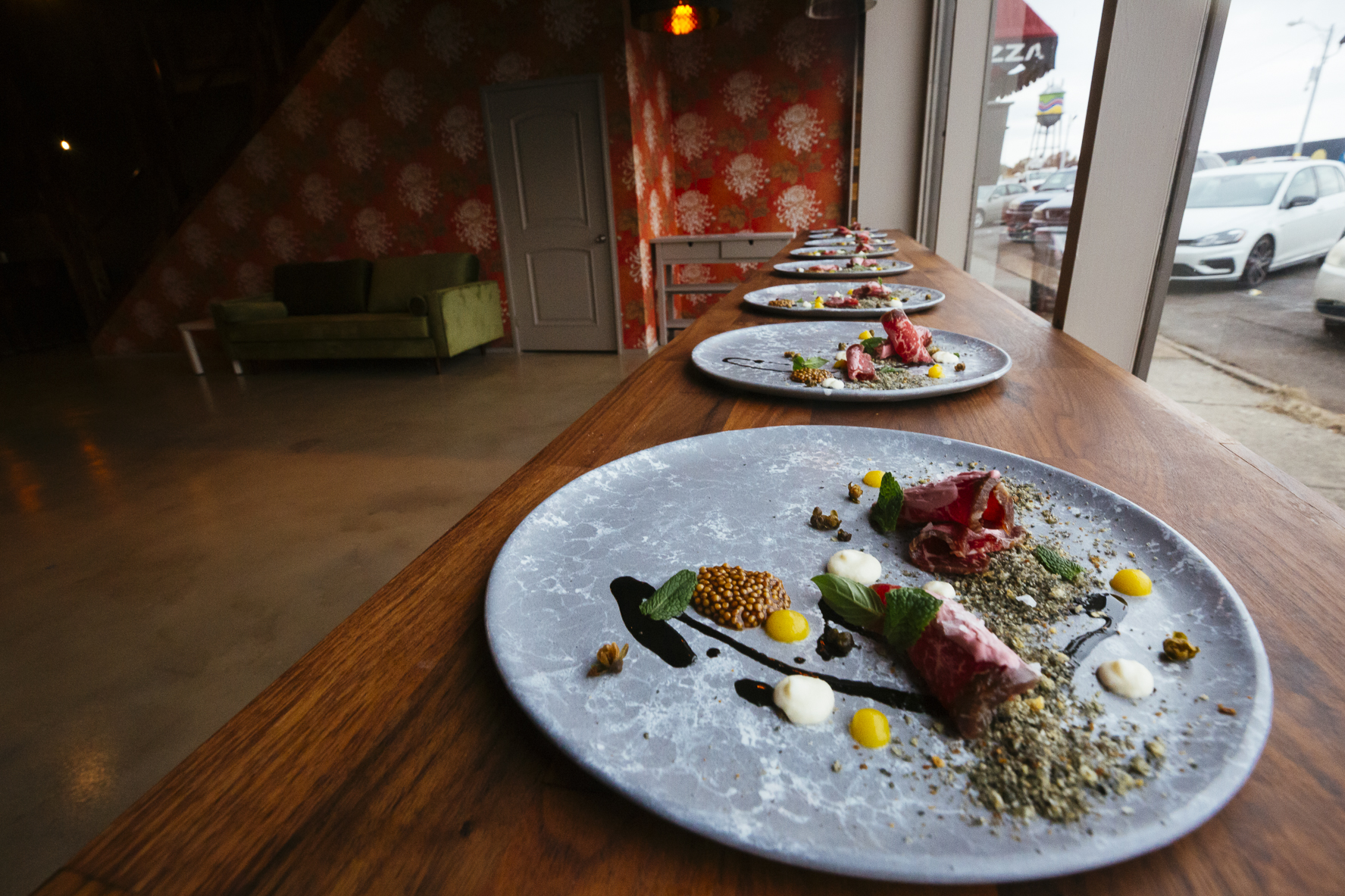 They’ve done a couple of dishes from Eleven Madison Park, which Zach says is among the top 10 restaurants in the world. The first was sweetbreads, chicken velouté, brioche and truffle bavarois. “That was a fat boy lunch,” he notes with a laugh.

Today they are replicating Eleven Madison Park’s lavender glazed duck, but with compressed plums instead of peaches. Michael, who has been wanting to play around with duck for a while, chose the recipe. He jokes, “We should do a duck two ways and serve it with goose and call it ‘Duck Duck Goose.’”

Zach plays along and adds, “Let’s put it on the kids’ menu.” 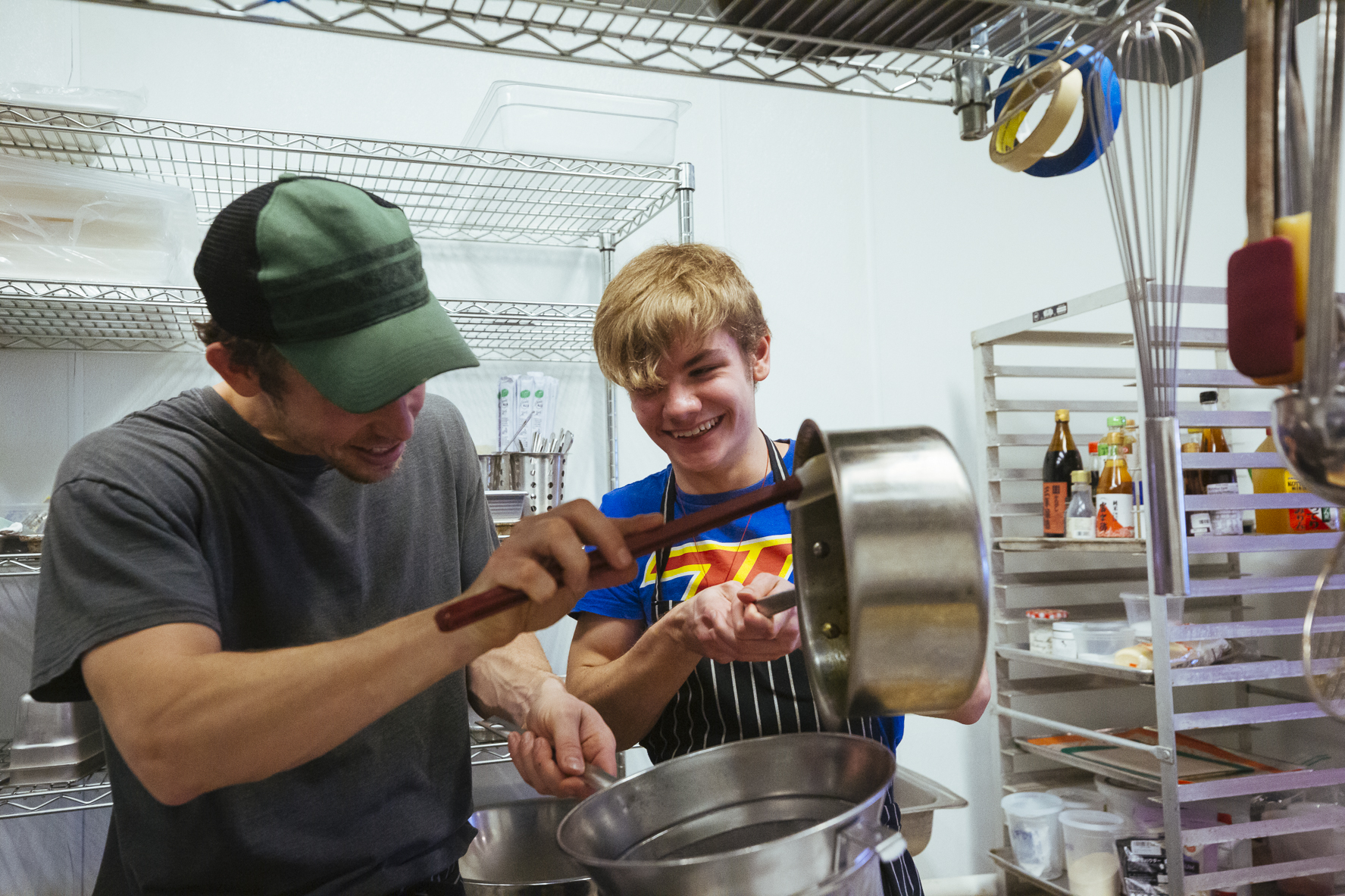 Speaking of the younger generation, Logan Guleff, a local teen who won MasterChef Junior in 2014 at the age of 12, has been attending as well. He saw an Instagram post about the workshops and reached out to Zach. “I do something so different when I cook—it isn’t the same process at all—so I have learned a lot. Fine dining can be hard to understand, and yet it is so innovative and how I want to cook. I am very grateful to Zach and the team,” says Logan.

I get called over and handed a spoon to taste the sauce. “It’s a super-reduced duck sauce with a caramel cooked with orange, lime, lemon zest, raspberry vinegar and star anise,” Zach tells me. 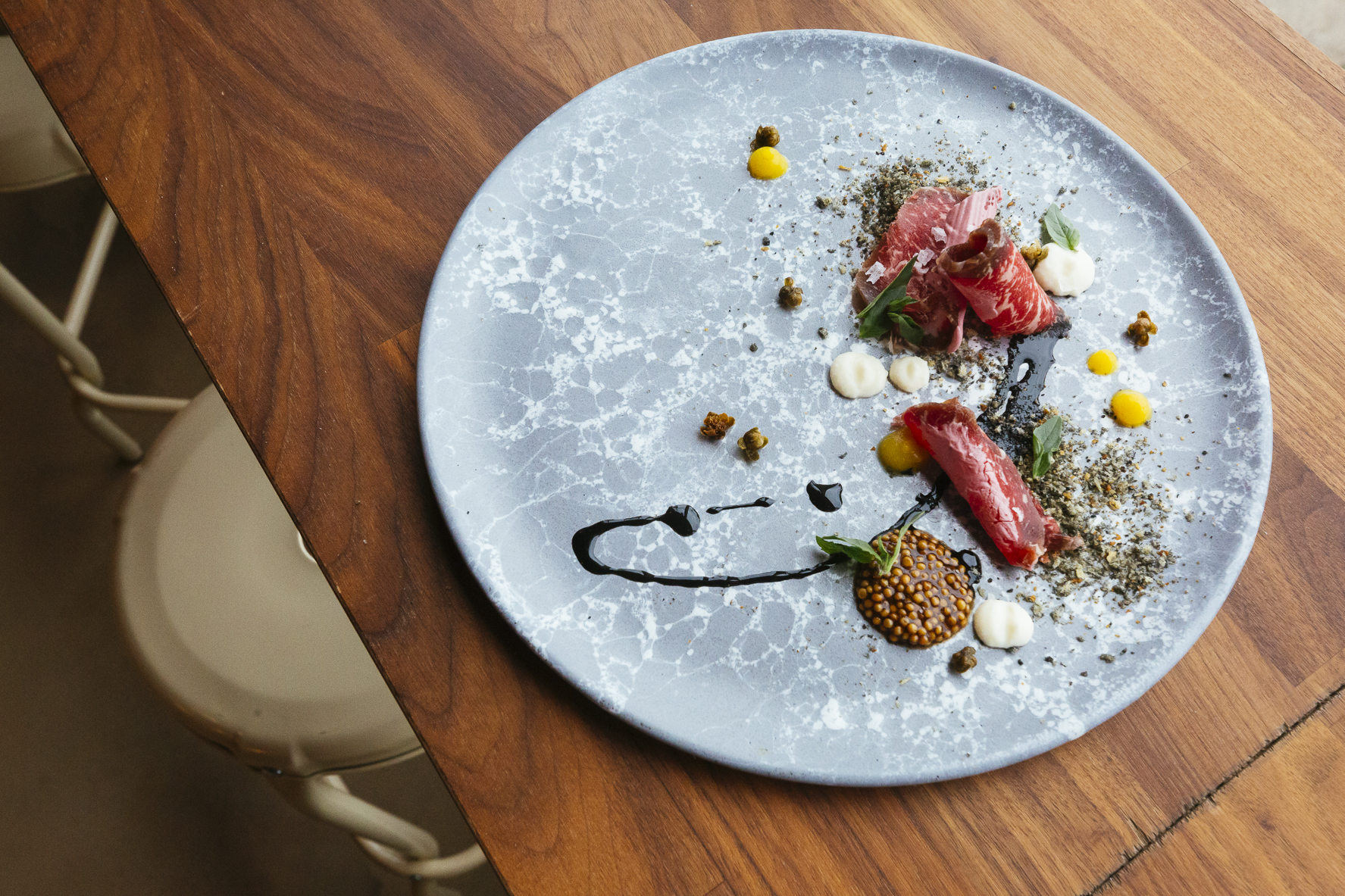 Wow. My taste buds feel as if they are truly alive for the first time.

The extensive cookbook collection currently occupying a very large shelf behind the beautiful new bar offers near endless possibilities for future endeavors. Zach says he will continue to hold the workshops at Lucky Cat, but will cut down the frequency to once or twice a month after the restaurant officially opens. “I would love to see the workshop gain momentum and allow us to increase our capacity and host classes for non-professionals,” he says.

Ziggy Mack is an internationally published photographer about town. When not immortalizing the movements of ballerinas, circus performers and mermaids, he spends his time finding candid moments involving delectable cuisines and the people that create them. IG:@fomoloop

Bitters from the Backyard